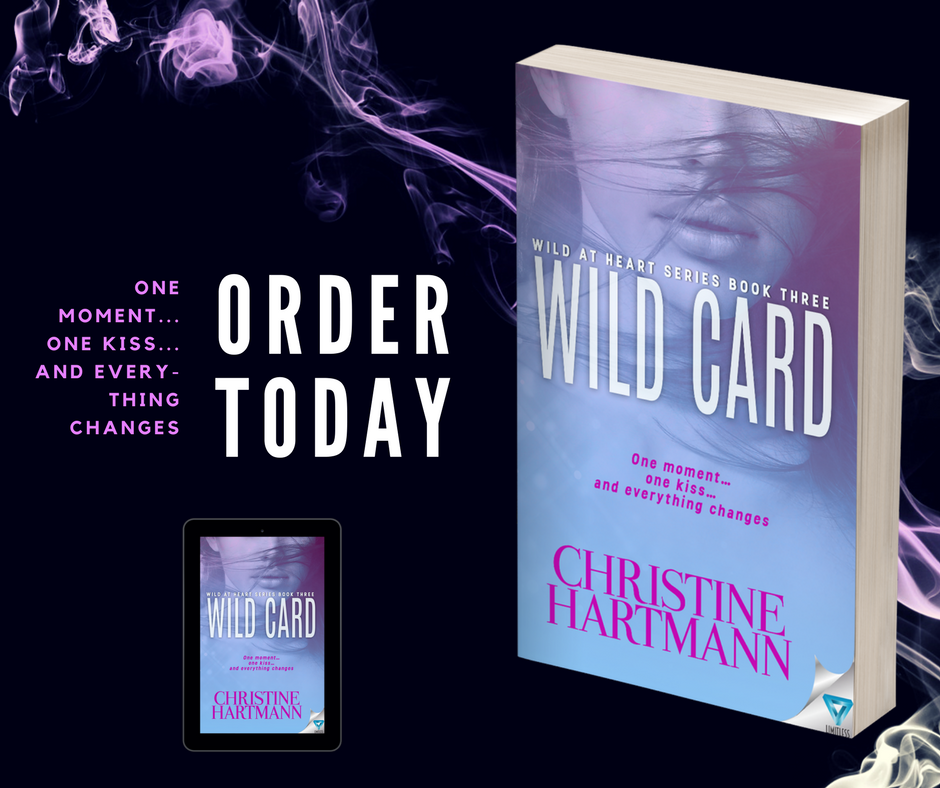 Book 3 of the Wild at Heart series has hit the virtual bookshelves! Join Ellie Atherton for the Vegas adventure of a lifetime… Here’s a preview from Chapter 3.

Bree relaxed and surfed satellite radio stations until she found a pop music channel. The wild breeze blew the last remnants of product from her hair and long strands whipped periodically across her face, making her feel as though she were driving through patchy fog. “It’s good to be young, free, and on the road,” her melodious alto hailed the steady trickle of passing cars.

A few miles out of San Jose, she eased her vehicle down the exit ramp for Morgan Hill. Her smile widened when she saw the donut shop’s sign. She congratulated herself for having studied the route to Las Vegas ahead of time. The drive to Vegas was, after all, not a punishment but an adventure. Not a failure to come to grips with her fear of flying but a sensible alternative to arriving for the long weekend’s festivities drugged, disheveled, and dismayed after a terrifying airplane flight. Instead she would arrive calm, clear-headed, and—with the help of a final stop in a rest area short of the city—cute. Just the kind of fiancée Mal wanted to introduce to his relatives. So what if she gained a pound or two on the journey? The prior weeks of dieting gave her ample wiggle room.

She pulled into a small strip mall, found a parking space, and killed the engine. The aroma of freshly fried donuts wafted on a light breeze. She inhaled deeply, leaned out, and took a photo of the storefront.

She added a blissed-out face emoji and sent Stephanie the text.

Her eyes were glued to the enticing photos of glazed, filled, and chocolate delights. She grabbed her purse, rolled up the windows, and slammed the door behind her. Then a car pulling into the space next to her made her jog for the sidewalk.
Out of harm’s way, she shaded her eyes, finding it difficult to glare effectively while squinting into the strong sun. The silver Camry’s door opened and a familiar voice reached her ears.

He stepped onto the sidewalk, grinning. “Almost faked me out by getting off the highway.”

She felt a tightening in her throat, as though someone were closing a noose. “You’re stalking me?” She looked at the shop behind her, wishing she’d parked somewhere else.

“Totally.” He laughed and sat on the hood of his car. “You left so fast, I never got the chance to tell you.”

“Vegas. Got a business meeting.”

She leaned against the building wall, the warmth of the cement soaking into her like a hot water bottle on a summer night, not soothing but irritating. The frown that had sprouted on the edge of her lips grew. “Nobody drives from San Francisco to Vegas.”

She cocked her head, placed a foot on the wall behind her, and stared as he gazed back through the aviator sunglasses. His blond, wavy hair fell to chin length. The folds of his untucked shirt fluttered around his waist in the light breeze. Tanned ankles poked out from under skinny jeans. He wore canvas sneakers without socks. His thin but muscular build, she thought, didn’t seem to have changed since the last time she glimpsed it in high school.

She planted both feet on the ground and turned to give him a more flattering view. He may not have changed. But she had.

“Why?” The question popped from her mouth like a shot.

“Why drive?” He shrugged and tossed his keys from hand to hand. “Never crossed the California state line in a car before.”

“In a car from a dump like Miser? What did you want to do, try slumming it like the rest of us?” Her hands balled into fists behind her back.

He spun the keys on his finger like toy helicopter blades. “Have a new assistant. She did the booking.”

Bree shook her head. “Bet she won’t have that job for long.”

“Been a long time since we saw each other.” He pocketed his keys.

Bree didn’t answer, afraid that if she opened her mouth, unknown sentences would tumble out, words she had no control over. The air between them felt thick, as though the universe created a temporary bubble that left her in limbo between high school memories and adult reality. She felt sucked back to the night of the prom, to the airless hotel hallway where she’d last seen him up close, the humiliation and misery as raw as if the past ten years had never happened. She fixed her gaze on the ground, her eyes narrowing, sending daggers of fury toward a crack in the sidewalk.

Ryder pushed himself from the hood and pointed his thumb toward the store. “Going in?”

Bree reddened. “No.” She looked around the mostly empty parking lot and pointed at a small grocery store in the far corner opposite them. “I’m going there for a drink and…carrots.”

“Was hoping you were going for the donuts.” Ryder sighed.

Minutes later, she watched from the store window as he returned to his car with a rectangular box and perched on the edge of the sidewalk by their cars, legs tucked between the curb and the cement parking space marker. She waited inside with the bag of carrots and bottle of water, hoping he would leave. After fifteen minutes, she trudged over to the cars. Beside

She leaned on her hood, tucking her skirt between her legs. The sun warmed her skin. She tilted her head and let her hair cascade down her back, thankful she’d taken time in the grocery’s bathroom to fix it.

“I got brownies.” He pushed the box toward her.

Bree shoved the box away with her foot. Her eyelids fluttered as she blinked back a sudden stinging. “I associate brownies with a bad experience. Can’t stand them.” She took out her car keys and punched a hole in the bag of mini carrots.

Ryder bit into a donut and gulped a frozen mocha latte. “You’ll live longer than me.”

Bree stared at the rapidly disappearing doughy ring in his hand. “But you’ll have more fun. That’s what happens when you don’t care about what you do.”

Later in the car, with the black highway stretching before her and a caramel fudge iced coffee in the holder next to her seat, she wondered why everything felt different. Her SUV wound slowly up Route 152 toward the San Luis Reservoir and Highway 5. Only intermittent trees and roads marked the passing miles amid monotonous parched grass, dried bushes, and brown hills. The ride she had been looking forward to now stretched in front of her like a bad dream. Talking with Ryder catapulted her back in time. It felt like trying on a cheap pair of sneakers a size too small, the kind that pinch your feet, cause blisters, and take the spring out of every step.

The pink phone on the seat next to her rang. She picked up her headset without thinking.

“You’ve got to tell.” Ryder’s voice sounded tinny. She watched him wave at her through the back window of the car in front of her and cursed herself for giving him her number.

“Tell what?” She kept her gaze on the road.

Bree involuntarily stepped on the brakes. Cars honked. She jumped and hit the pedal harder, causing a slight skid. She clutched the steering wheel with white knuckles until the blare faded into the distance.

“Want to get off the highway?”

“Right. Your fiancé would never forgive me if I didn’t get you there in one piece.”

Her fingers throttled the steering wheel. She straightened the car and pushed the odometer back to above the speed limit. “You overheard at the rental agency. About my engagement.”

She rolled her eyes and her fingers hovered over the end call button. “His name’s Malcolm. Mal for short. And you are not responsible for getting me to him.”

“Want to meet this guy who stole your heart.”

She mouthed the phrase, Over my dead body.

“In a bar.” She spat out the words, hoping he would pick up on the acerbity and end the conversation.

Ryder’s laughter burst through the headset so loudly she turned down the volume.

“A bar’s about the last place I would have looked for you.”

Ryder’s car slowed and Bree took her foot off the accelerator as she waited for him to respond. When he didn’t, she continued. “I wasn’t desperate. It didn’t start out in a bar.”

She began the story the way a prosecution lawyer would pester a belligerent witness, hoping the facts would grind him to a stop. “I was on vacation in Cancun with some girlfriends. There was this good-looking guy hanging out in the lobby.”

“That was Chad.” Bree took one hand off the steering wheel and felt around the passenger seat. She found the box of donuts he had given her, brought a jelly filled one to her mouth, and continued between chews. “We all went up to this guy, Chad, together. I asked him to come with us, but he refused.”

“Jerk.” Ryder gave a thumbs down through his car’s rear window.

Bree choked on powdered sugar. She pulled the last donut out of the box and bit in. “Said he just broke up with someone named Brianna. Couldn’t face a girl with the same name.”

“How does this get to Mal?”

“I went into the bar for a drink. After a while, Mal sat down next to me. He was recovering from an allergy attack.” She licked her fingers and concentrated on the road. “He’s allergic to dogs and sat next to a service dog on the flight down.” She pulled into the left lane and passed Ryder’s car. The Camry revved, passed her, and sidled again into the space in front.

Ryder paused. “My girlfriend broke up with me recently.”

“Sure you’re good at finding new ones.”

The air in the car felt stale. She turned up the air conditioning. “Come on, you’re a walking magazine cover.”

“All the girls from high school.”

Ryder coughed. “What do they say about you?”

“None of your business.” Bree pulled at a fingernail with her teeth.

“Of fat me?” Her words discharged like the report of a rifle.

Ryder’s tone dropped an octave. “I’ve known you since you were, like, fourteen. So I can say something, right?”

“No.” The donuts churned in her stomach. Her eyes followed the white line marking the shoulder of the road. She raised her hand, ready to take the headset from her ear.

Bree flung the headset onto the seat beside her. “Thanks.” She pushed her purse over the mic and blinked back tears that sprung into her eyes. Looks like in high school you were just gearing up to become a nasty adult.