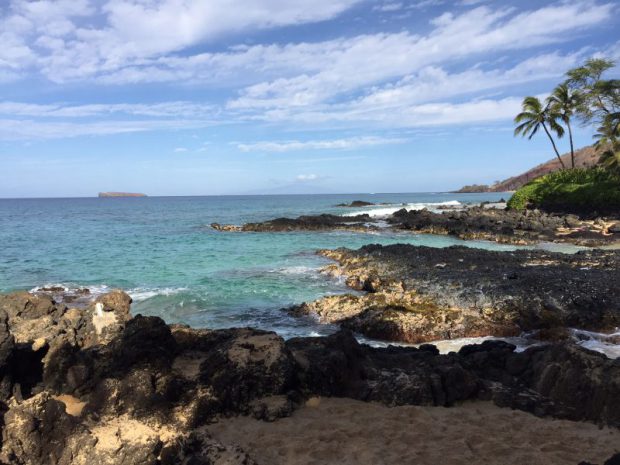 Ellie Atherton is done with love.  Two failed relationships are two too many. Refurbishing a house on Maui for an eccentric heiress seems just what Ellie needs to get her life back on track. A little separation and hard work will do her good.  Except her tropical island paradise brings more than she expected. Denver Edgerly isn’t just another random tourist at the beach. He’s Ellie’s new neighbor and everything she’s spent her life looking for. But is her new dream guy everything he claims to be?

Exclusive sneak peek at the first part of Chapter 1:

“Taxidermy?”
The word conjured ratty, stuffed wildebeests in a natural history museum’s savanna exhibit, with bald spots worn from countless curious children’s fingers reaching past the sign reading Do Not Touch. Ellie retreated against the backrest of the basement restaurant’s cushioned leather bench and camouflaged her dropping jaw with a sip of wine. The man in tweed with a two-day growth of thin facial hair leaned across the narrow table that separated them.
“You’d be surprised by the number of people who don’t even know what taxidermy is.” He glanced around the small, crowded, and dimly lit room. “Even here. Where we’re all supposed to be…” He raised long, hooked fingers in the shape of bent quotation marks, exposing untidy nails, “professionals looking for dates.” He lifted his bottle of IPA.

Ellie jumped gratefully into the ensuing pause. “Professions. That’s a good speed dating subject. I cat sit.” She laughed and pushed errant strands of hair from her face. “But it’s not my life’s goal. I’m in grad school. It pays the bills.”
“I have a cat.” Her companion groped through one jacket pocket and another, laying on the table an assortment of strangely shaped metal instruments Ellie didn’t examine too closely. He finally stood and clutched intimately at his pants. “Ah.” He extracted a gray flip phone from his front pocket, scrolled, and turned it toward her.
Ellie squinted at the tiny screen. “I can’t really make out what your cat is doing.”
“He’s got a mouse in his mouth. Quite a trick. Getting the critter to fit in there.” He flicked the phone shut with a click. “Small animals are hard to dissect.”

The table between them felt suddenly disturbingly narrow. Ellie peeked at the smart phone in her lap. “Gee, time’s almost up. And I’ve got one last burning question.” She rubbed her nose to suppress a grin. “Do you generally have luck with speed dating?”
The shrill switch-partners tweet reverberating in the low ceilinged room obscured his response. His spindly hand hovered in the air like a bedraggled bird wing, waiting for Ellie to shake it. A sudden coughing fit seized her. She held her napkin to her mouth and shrugged. He sniffed, rubbed his nose on the sleeve of his herringbone jacket, and turned away.

Ellie circled “no” with thick black marks next to Mr. Taxidermy’s number and looked to Celine, who was sitting a few tables down. Ellie mouthed, “Watch out” and raised her eyebrows in the taxidermist’s direction. Celine pointed a stealthy pinky at the retreating back of the man who’d just left her own table and rolled her eyes in crazy loops. Ellie smiled.
“Seems like you’re having fun, number sixteen.”

A tall, dark haired man of about thirty slid into the seat opposite Ellie. She grinned and dropped the scorecard into her lap. “I’m learning that what they say is true.”
“What’s that?” He shifted his martini glass to the edge of the table and rested his hands where she could see them. Ellie examined the close-cut nails, the strong fingers, and the dark hair on the knuckles, neither sparse nor Neanderthal. She sensed rather than observed him scanning her and felt a soft blush warm her cheeks.
“That you learn more in five minutes face-to-face than you do in five hours of emails.” She met his dark eyes, a grin still playing at the corner of her mouth.
He nodded, his expression open, welcoming. “I’m a believer. My company swears by performance-based interviewing.”

Ellie cocked her head and gave him her best smile. “So tell me what you do.”
The man opposite rattled off a distilled resume: CEO, mountaineer, and soup kitchen worker. His general demeanor matched his hands, manly yet approachable, tough yet seemingly warm. Ellie couldn’t believe her luck. A gorgeous, approachable stranger, one fit for speed dating website advertisements.
Play this one right, Ellie, she thought.
She admired his career high points, skimmed over her own, and segued the conversation easily into hobbies and weekend activities. Her fingers played absently with her wine glass, watching his hands slowly fold and unfold, like wings on a giant butterfly.

The vibration of an incoming call in her lap made her jump. Her hands twitched and, before she could catch it, her glass toppled, spilling red wine across the table in a widening sea that threatened to engulf the CEO and his expensive-looking slacks.
Her date ricocheted out of his chair as though ejected. He stood far away, rubbing frantically with his fingers at a stain located embarrassingly near his zipper. Ellie leaned forward on her bench and shot him an apologetic look as she dabbed her cocktail napkin at the corners of the expansive puddle with one hand and waved frantically with the other for help.
“I’m sorry.” She offered him a second tiny napkin, handed to her from the neighboring table. “I’m a klutz. Not a good thing for you to learn about in person.”

She peeked at him to check for a smile. He took the proffered napkin without his eyes leaving the widening blotch. She sighed and concentrated on cleaning up the mess.
Minutes later, the time’s up whistle echoed in her ears. She watched Mr. CEO draw large, repeated circles around the “no” next to her number before he moved with a grateful smile to his next table.
Celine winked at her. Ellie bit her lip and shrugged.
“Do I need a wet suit?”
Ellie looked up to see… see more at the September 6 release…GET EXCITED!